Steve Yue, from Delano, brought out his dogs to protest for the maximum penalty for Robert Gonzales, who was scheduled to be sentenced for animal abuse Thursday in Kern County Superior Court.

Brings up one of my favorite quotes, “If you don’t stand for something, you’ll fall for anything.” 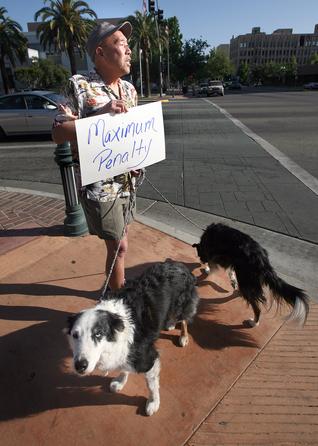 UPDATE: CNN and the UK Telegraph have both reported that the dogs have been rescued since the footage aired, and are both receiving veterinary care; the more seriously wounded dog is at a clinic in the city of Mito, while the protective spaniel-type dog is receiving care at a shelter in the same town.

The original Japanese news video was removed from YouTube so I have this: