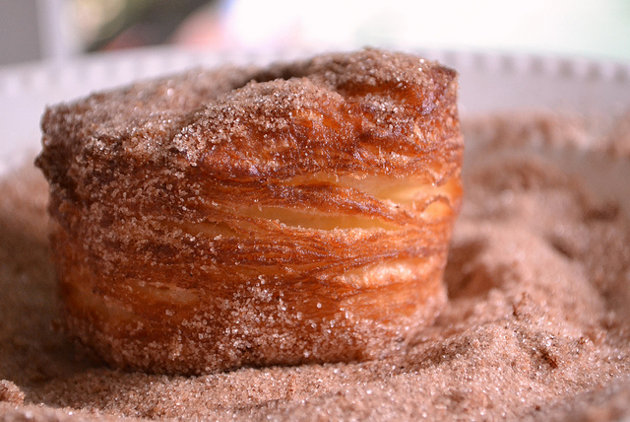 Yes, I made cronuts. I jumped on the bandwagon. Turns out, everyone’s right. I might pay $40 for one of these on the black market.
Not since Krispy Kreme have I seen this level of fried dough fanaticism. In the month since their inception tons of copycats have popped up — since the name is copyrighted, others are calling theirs “Dossaints” or “CroNots” — and in New York, lineups are going around the block for the things, which are also being sold on the black market. It’s full-on cronut mania.

Madness, I tell you. But I’m always up for a challenge, and we really need to start warming up for Stampede. So I took out the deep fryer. (Note: you don’t need one. A pot works just as well.) 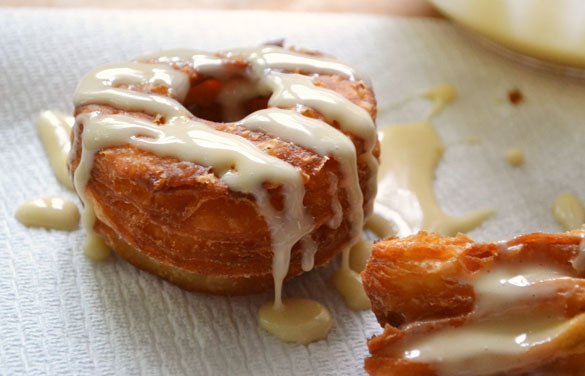 Puff pastry sounds daunting to make from scratch, but it’s really a matter of mixing together a basic yeasted dough, slathering it with butter, and then folding it up like a letter a bunch of times, rolling and chilling between each fold. It isn’t as finnicky as you might think, particularly when the end result is a batch of buttery, golden croissoughnuts. 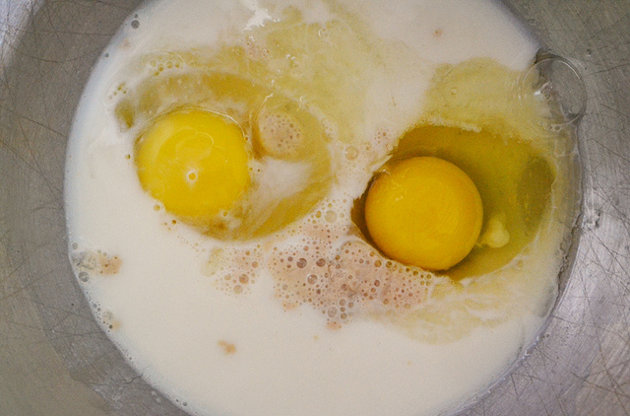 In a large bowl, stir together the milk and yeast. Stir in the sugar, eggs, and vanilla and mix well. Add a cup of the flour and the salt, then gradually add another 2 1/4 cups of the flour, stirring and then kneading for a few (or several) minutes, until it’s smooth and elastic, and still a little tacky. 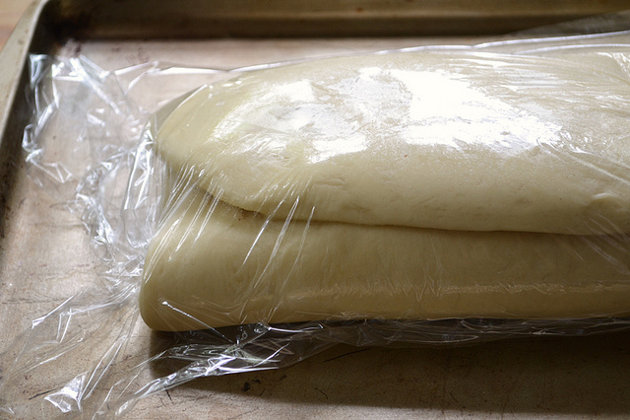 Transfer your dough to a baking sheet and cover with plastic wrap; chill in the refrigerator for 30 minutes. 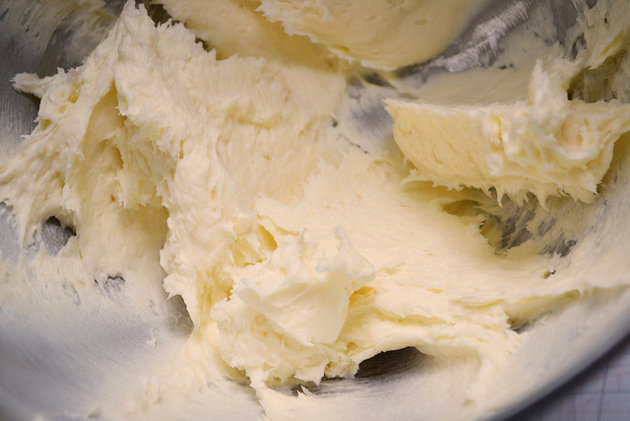 Meanwhile, beat the butter and remaining 1/4 cup flour with an electric mixer for a couple minutes, scraping down the sides of the bowl, until smooth. 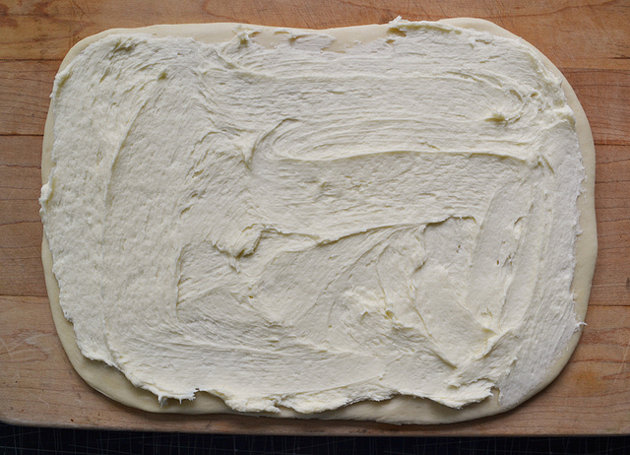 When the dough has chilled, turn it out onto a lightly floured surface and roll into a rectangle that is about 13 by 18 inches and 1/4-inch thick. Spread the butter evenly over the dough.

Fold it as you would fold a letter, in thirds. (Unlike a letter, the dough ends should line up, so that it’s folded exactly in thirds.) Cover the dough in plastic wrap and put it back into the fridge for 30 minutes. 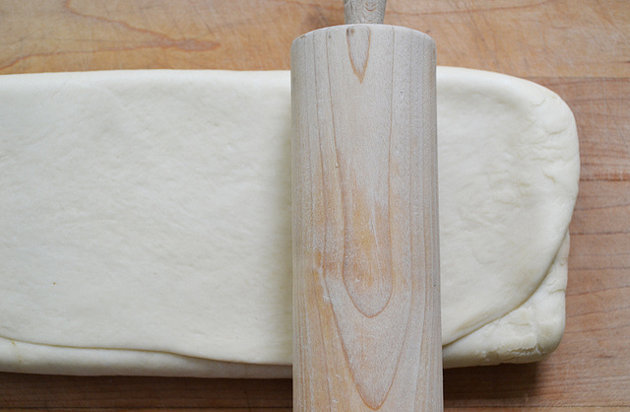 Pull the dough out and put it back on the countertop, with the open sides to the left and right. Roll it out into another rectangle. 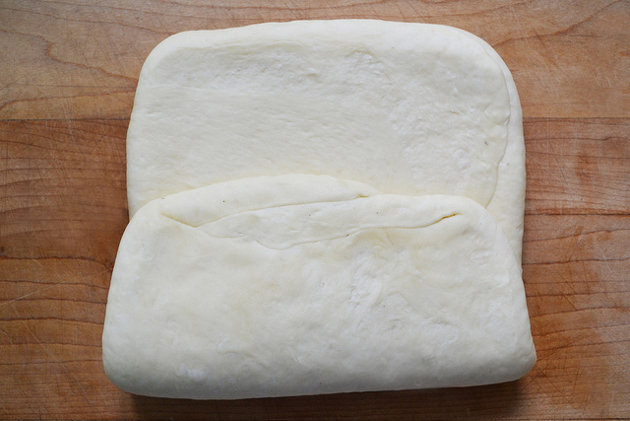 Fold the left third over the middle, then the right third over the middle. (This is referred to as a “turn”. To keep track of each fold — or turn — press your finger into the dough at the edge to make two marks — you can do this each time you roll and fold so that you know how many times you’ve done it.) Chill the dough for another 30 minutes. 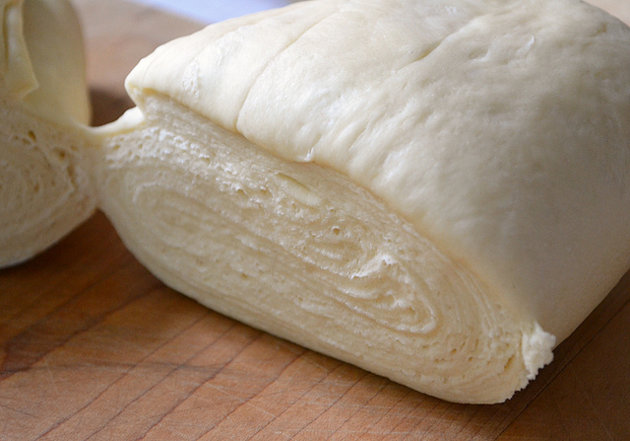 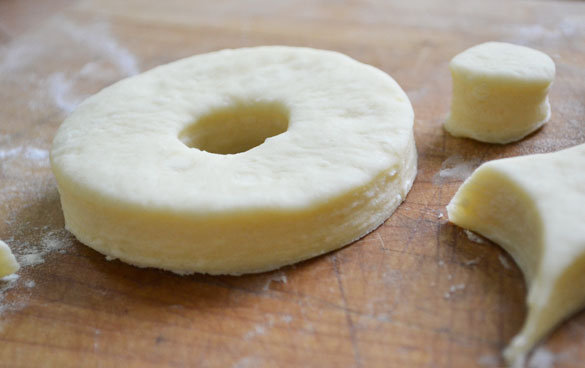 Then, roll your dough out to 1- to 2-inch thickness, then cut it into rounds, or rings, or scraps. 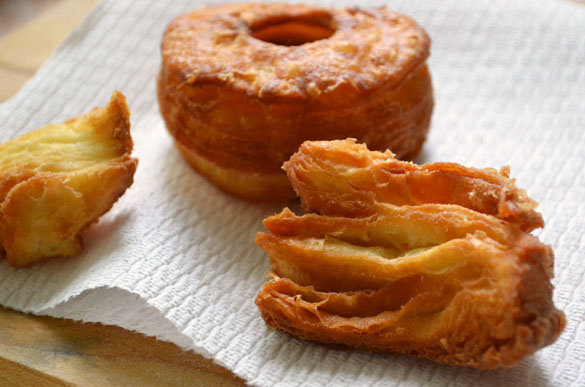 In a heavy pot (or deep fryer), heat a couple inches of oil to about 350° F, or until it’s hot but not smoking, and a scrap of bread sizzles when you dip it in. Cook the doughnuts in batches, without crowding the pot (this can cool down the oil), flipping as necessary until deep golden. Transfer to a baking sheet lined with a paper towel. 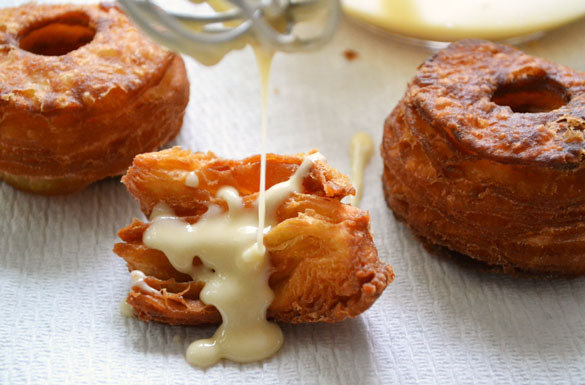 Meanwhile, whisk together the icing sugar, maple syrup, and enough milk, water, or cream to make a drizzling consistency. Drizzle over the croissoughnuts while they’re still warm. Then try not to eat the whole batch. 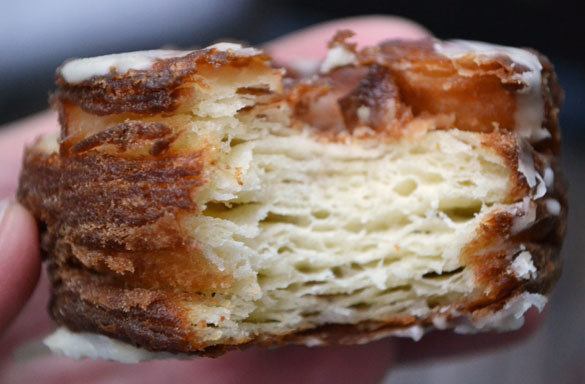