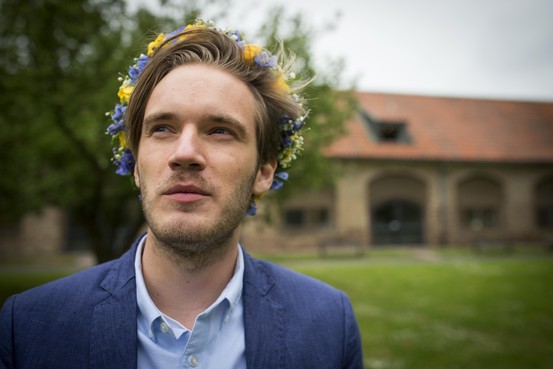 STOCKHOLM—Felix Kjellberg doesn’t play a very convincing mega star. A native of Gothenburg, the seemingly modest Swede avoids the spotlight, has no entourage, and is uncomfortable with success.

Put Mr. Kjellberg in front of a Web-camera and he transforms into PewDiePie, by far YouTube’s biggest draw. He has built a base of 27 million subscribers using a decidedly unorthodox approach to playing video and mobile games.

His videos aren’t traditional game reviews. “Pewds,” as he is often called, simply plays games and allows his audience—mostly teenagers—to peer in on his experience and hear random opinions interspersed with odd behavior. He contorts, screeches, swears, sings and even “twerks” to portray his feelings.

The 24-year-old Mr. Kjellberg, who created PewDiePie five years ago, has parlayed his persona into a multi-million-dollar franchise and has emerged as a leader among tech-savvy whiz kids with the speed that established media companies can only dream of replicating.

His following is so big that even games he criticizes get coveted publicity. Earlier this year he made a clip headlined “Flappy Bird—Don’t Play This Game,” in which he curses a blue streak while he tries to conquer the then-unknown mobile app. Apparently intrigued by his warning, millions of people downloaded the game. It helped propel “Flappy Bird” and its Vietnamese developer from obscurity into a world-wide sensation.

“It’s cool to have this kind of influence, but at the same time it’s kind of scary,” said Mr. Kjellberg, speaking in a rare interview. He routinely turns down media requests, citing a busy schedule that includes publishing multiple clips a day of him playing obscure games from an apartment south of London.

In December 2012, PewDiePie signed on with Maker Studios, a producer of online content. In 2013, his operation pulled in the equivalent of $4 million in ad sales, most of which is pure profit. Maker Studios—which counts on PewDiePie as its most important personality—sold itself to Walt Disney Co. earlier this year in a deal that could be worth close to $1 billion, depending on certain performance targets. He gives a cut to Makers Studio, which helps with advertising sales.

While his subscriber base creates unparalleled reach on Google Inc.’s YouTube, his success reflects broader momentum for a genre that has proved an ability to attract notice. One of his peers is Jordan Maron, a 22-year-old American known as “Captain Sparklez” who has attracted 7.5 million subscribers with videos related to Mojang’s popular Minecraft building-block game.

“Unlike many professionally produced shows, I think I’ve established a much closer contact with my viewers, breaking the wall between the viewer and what’s behind the screen,” he said. “What I and other YouTubers do is a very different thing, it’s almost like hanging around and watching your pal play games. My fans care in a different way about what they are watching.”

YouTube is playing a more integral role in the experience of gamers. Last week, Sony Corp. announced an update to PlayStation 4 that integrates the online video service into the console so clips of game play can be easily shared.

Mr. Kjellberg’s career took flight while attending college in Gothenburg, on Sweden’s southwest coast. He attended few classes, spending more time at home playing games and uploading to YouTube. After dropping out, he started selling hot dogs. To pad the number of views on his channel during those early days he would repeatedly hit F5 on his keyboard to refresh the browser.

Within a few years, he had no use for the refresh button.

With growth comes a level of attention that makes Mr. Kjellberg uncomfortable. “I’m so central to YouTube now, and that puts me in the spotlight and raises a lot of questions like ‘Why is he so big?’” he said. “I’d much rather prefer to have something like 5 million subscribers.”

Mr. Westbergh jokingly describes it as “the world’s dumbest game.” But PewDiePie’s willingness to make videos about Goat Simulator legitimized its existence.

“Having guys like PewDiePie playing our game has been tremendous marketing,” Mr. Westbergh said. “And for us, there have been no costs involved.”

Coffee Stain Studios didn’t try to steer Mr. Kjellberg’s opinion, the CEO said. “What we can do, however, is make a game these guys would like.”

After Mr. Kjellberg played the bare-bones and difficult “Flappy Bird” in January, he uploaded a video that ripped the game. Its creator, Dong Nguyen, was soon earning over $50,000 a day on a game that had taken just a few days to build. Mr. Nguyen eventually pulled the game, saying it was too addictive.

“Apparently [Mr. Nguyen] had a hard time dealing with his success, and I feel bad about that,” Mr. Kjellberg said. He notes “99% of developers are super happy that I play their games.”

PewDiePie’s foul language and silly antics can be confusing or offensive to the uninitiated. But Mr. Kjellberg says “I’m not faking it or acting. I just let go and have fun” and this appeals to his core audience.

Jens Orjeheim, 44, has an 11-year-old son who is a big fan of PewDiePie, but he fails to appreciate the appeal.

“I think there are things in society that can be seen as contributing to a positive development,” he said. “PewDiePie isn’t one of them.” He is critical of the fact that Mr. Kjellberg makes money from encouraging kids to spend more time in front of screens and elevating the importance of videogames.

Vigor Sörman, founder of a YouTubers network in Sweden, said the trust Mr. Kjellberg builds with viewers is essential to continued success.

“PewDiePie is like a cool friend you have and subscribing to him is almost like Skypeing with him—that’s why viewers are such dedicated fans.”